Insights into parameters for an Africa-led capacity development for EIDM 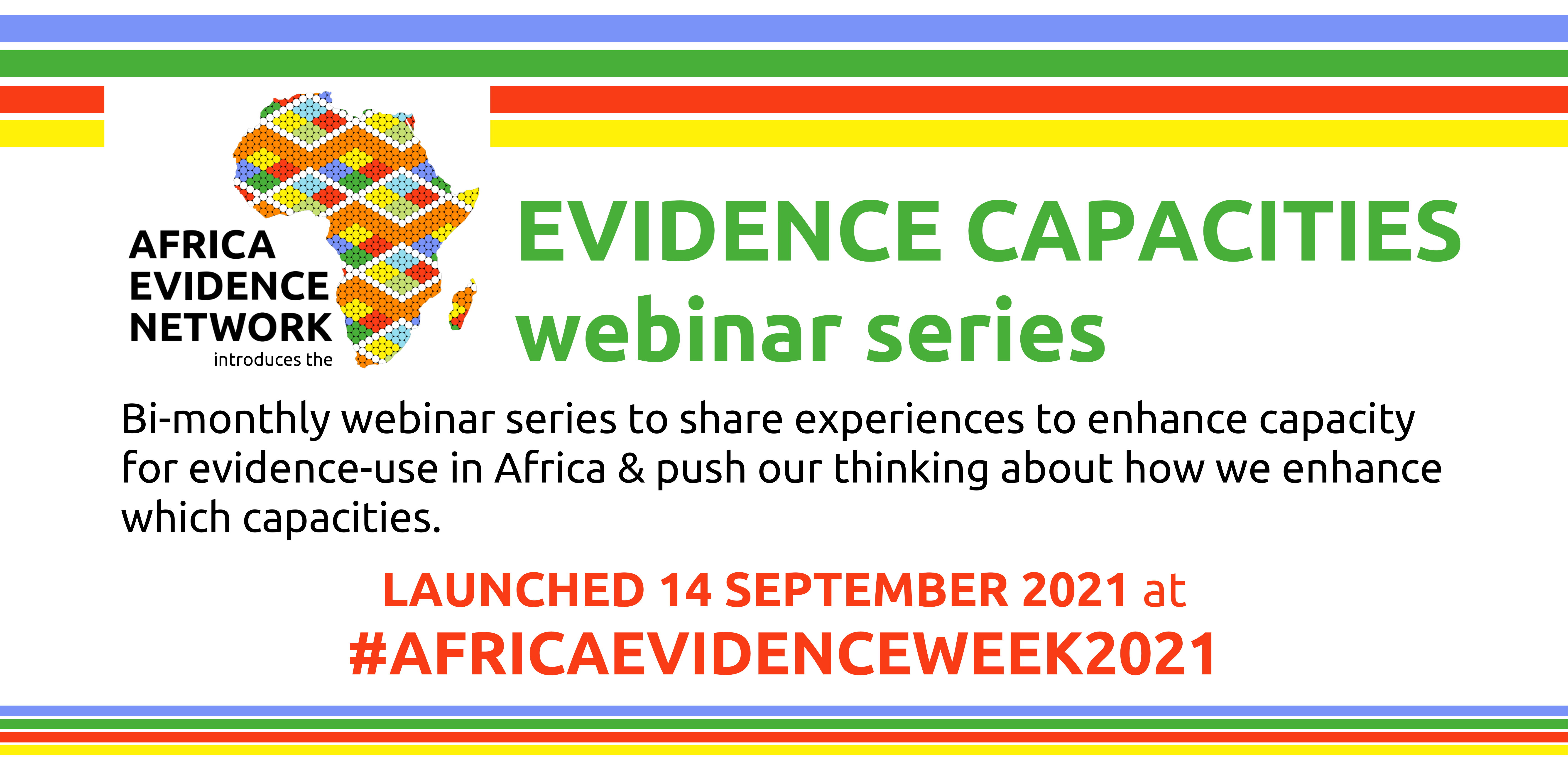 This blog post is based on the first webinar of the new Evidence Capacities webinar series, hosted by the Africa Evidence Network (AEN). The AEN Evidence Capacities webinar series aims to create a platform for sharing experiences and ideas that push our thinking about how we enhance capacities for evidence-use in Africa. The series also strives to enhance connections that can lead to collaborations among AEN members to strengthen evidence capacities using evidence- and practice-informed approaches. It is our hope that these discussions will be the basis for improving and illustrating the AEN’s Manifesto on capacity development for evidence use in Africa.

Panelists at the webinar commented that the evidence agenda is already popular and pursued by different countries in the African region, reiterating that that is encouraging. Even so, the panel of speakers quickly observed that to direct an Africa-led approach to capacity development, certain crucial elements need to be in place and maintained.

To appreciate the importance of these crucial elements, one first must acknowledge the reality that for the most part, capacity development work in Africa is done through aid-funded projects, with scope, details of partnership, objectives and methods often pre-described in the funding calls. Much as this is the case, a resounding confirmation from the webinar was that the time is ripe for an African-led approach to EIDM capacity development. A blog post that was written by Ruth Stewart and Beryl Leach explored the apparent disconnect between supply and demand for capacity development. They showed that most of the time ‘capacity-building' is tailored to donor needs and that learning about evidence production is not aligned well to evidence-use. Building new initiatives that are Africa-led, collaborative, and use evidence-informed approaches, methods and tools are important to shape capacity development for evidence-use. Below, I point out some of the contributions discussed in this webinar.

Currently, evidence capacity development follows a conventional path that foregrounds training of technical matters through mediums such as workshops and courses. This approach typically fits with a paradigm of ‘capacity building’. A paradigm of capacity development or capacity sharing however foregrounds more engagement between partners. And it is this second paradigm where Africa-led development of evidence capacities sit. In her critique of these conventional approaches of ‘capacity building’, Candice Morkel of the Centre for Learning on Evaluation and Results – Anglophone Africa (CLEAR-AA) explained that the training approach must be adapted to reflect changes and various dynamics in the evidence ecosystem. For example, to reflect and adapt to advances in technological innovation. The key to making such changes is collaborative work and co-production with partners from all over the evidence ecosystem.

Another point emphasised was that from the perspective of evidence capacity strengthening, partners’ inclusiveness and participation of stakeholders could not be stressed enough. Candice shared that a ‘no-one-knows-it-all’ style makes a lot of sense for the Africa-led approach best-suited for EIDM capacity development in Africa. She motivated that working together with collaborators, stakeholders, government partners, and others ensures that there is no negative dependence; no one stakeholder expects to be fed information which in turn bolsters the sustainability of evidence capacities.

Leandro Echt from the International Network for Advancing Science and Policy (INASP) first acknowledged the AEN’s Manifesto, which includes input from African EIDM capacity development organisations and practitioners, as a critical effort towards enhancing Africa’s evidence capacities. Leandro also outlined a gap he observed in the Manifesto: the Manifesto does not explicitly state exactly what must be changed in the concrete practice of capacity development. He challenged everyone to think deeper about this opportunity for further contribution. Leandro went on to argue that an Africa-led approach to EIDM capacity development should respond to the African context by speaking to the nuances and complexities of African policy frameworks, guides, evidence, and decision-making. The requirement for a nuanced understanding of Africa’s evidence ecosystem necessitates conducting context studies, including political economy analyses, Leonardo pointed out. Be sure to read the blog posting by INASP’s Emily Hayter “Moving beyond ‘the norm’ for capacity development”.

Moreover, Leandro also spoke about the role of international organisations in our thinking about an Africa-led approach. He explained that international organisations ought to play a supportive, rather than a leading role. If this were done well, it would ensure and support EIDM capacity development leadership from within Africa. Elaborating, Leandro shared that the Africa-led approach ought to be able to leverage thought leadership and practices that are coming from the region. That is, assuming an approach to evidence capacities that moves and grows from the centre (Africa) rather than one that has the centre externally governed and directed. Leandro also cautioned that this requires African capacity development organisations to be proactive, to see opportunities and seize them. The AEN Manifesto is a trailblazer in this regard.

Comments from the third panelist, Leyla Abdullahi from the African Institute for Development Policy (AFIDEP), also raised exciting and important points. Leyla first addressed the question of an enabling environment for a successful evidence capacity ecosystem. She noted that such an environment ought to have a platform that promotes interaction between researchers, policy (and decision) makers, and other relevant policy stakeholders. A network as the AEN is a typical example of a space for such interactions.

Leyla also suggested exploring innovative proposals such as incorporating incentives for practitioners. She explained that such incentives could be about professional development. These incentives could be designed such that they help bring particular capacities to an institutional level. Leyla used an example of someone who is given an advantage on professional and career opportunities owing to a recognition of their contribution to the field. This contribution could be publishing, establishing and nurturing relationships with policymakers, for example. Leyla’s point is that perhaps those making such contributions to the field ought to be given an advantage over someone who might be more qualified and experienced but not actively contributing to the field as much. She reasoned that no harm is rendered if the Africa-led approach finds new and innovative strategies to motivate and incentivise practitioners.

Confronting and redressing power asymmetries in our conceptualising of an Africa-led approach to capacity development sits somewhere at the top of a ‘must do’ list. All three experts kick-started the ‘knowledge power dynamics’ conversation when they commented on this phenomenon of emphasising particular types of evidence over and above others. For example, they remarked that citizen evidence and indigenous / local knowledges tend to receive minimum appreciation as worthwhile types of evidence, while the bulk of recognition and appetite goes to synthesised research evidence. I think we need to adopt an intentional approach to encourage a broader-stroke understanding of what counts as evidence in decision-making. It is imperative to get this question right at the onset. Bringing various types of evidence(s) into conversation leaves no one alienated, marginalised, and it ultimately enriches the overall process of evidence-use culture. And we have to then carefully think through what this means for capacity development, including who is ‘present in the room’ and whose knowledges are informing our capacity development initiatives.

We have begun exploring, in detail, this question of power dynamics in situating an Africa-led capacity development approach; the second webinar of the series: ‘Designing for equity in capacity development for EIDM in Africa’ dealt with that aspect. We look forward to sharing a blog post and recording of this webinar soon.

I will leave you with two discussion points to discuss on LinkedIn, and of course, you are welcome to raise others. First, what does an Africa-led approach to evidence capacities mean for you? Second, what are the key dimensions and aspects?[1] I invite you to continue the conversation asynchronously via LinkedIn until the next webinar in our series.

About the author: Likhwa Ncube is a programme officer at the Africa Evidence Network secretariat, responsible for leading the understanding of the art and science of evidence-use in Africa (in the Evidence Communities portfolio) at the Africa Centre for Evidence.

Acknowledgments & Disclaimer: The author is solely responsible for the content of this article, including all errors or omissions; acknowledgments do not imply endorsement of the content. The author is grateful to Carina van Rooyen, Siziwe Ngcwabe, Charity Chisoro and Precious Motha for reviewing and giving feedback on a previous version of this article. The author also thanks Natalie Tannous for her editorial support. The views expressed in published blog posts, as well as any errors or omissions, are the sole responsibility of the author/s and do not represent the views of the Africa Evidence Network, its secretariat, advisory or reference groups, or its funders; nor does it imply endorsement by the afore-mentioned parties.

[1] The AEN Manifesto has defined this broadly as “(1) enhancing and sharing capacities of individuals/groups related to evidence use in Africa; (2) improving organisations and their articulation with the evidence ecosystem in Africa. to get things done; and (3) improving systems, processes, institutional structures, and modes of operation of the African evidence ecosystem(s) for effective, equitable and ethical use of evidence to have the Africa we want.”